An indication of how far The Age, a tabloid newspaper that is published from Melbourne, has sunk can be seen from a letter to subscribers [note, not those who read it free] from the editor, Gay Alcorn on 2 April.

Perhaps to imbue said document with importance, Alcorn chose to place it behind a paywall. [The Age home page can be read without payment and a limited number of articles are also free to read, before the paywall kicks in.]

But Alcorn apparently considers her writing so important that it has to be paid for. Of such stern mettle are editors [and journalists too] made. Heaven forbid that the common man should be able to read this important missive.

The incestuous relationship between Australian journalists and politicians has been exposed again, with the journalist in question being the political editor of news.com.au, Samantha Maiden [seen below in a picture from YouTube].

The politician, sadly, is no longer in this world; Kimberley Kitching, a senator from the Labor Party, died on 10 March of a suspected heart attack. [More on Canberra’s incestuous culture here and here.] 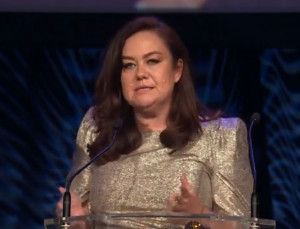 Given the way that News Corporation, the empire owned by Rupert Murdoch, used alleged events prior to Kitching’s death to accuse other Labor senators of contributing to the stress that led to her exiting the mortal coil, nobody except an idiot would have assumed that the topic would not come up for discussion during political programs on the weekend after her death. END_OF_DOCUMENT_TOKEN_TO_BE_REPLACED

The ABC should find a regular presenter for its Q+A show, instead of shuffling through three of its employees week after week, after one of the trio, Stan Grant, proved conclusively on 24 February that he is incompetent at the job.

Grant asked a member of the studio audience to leave after the man, a Russian-Australian named Sasha Gillies-Lekakis, asked a question about the Russia-Ukraine conflict, which contained an erroneous fact. It did not appear to be popular with the audience and the panel which was heavily tilted towards Ukraine.

Gillies-Lekakis would do well to consult a lawyer about his ejection; as an Australian taxpayer, he is also one of those who fund the ABC which receives a little more than a billion dollars from the Federal Government each year.

END_OF_DOCUMENT_TOKEN_TO_BE_REPLACED

The departure of Hamish Macdonald from the position of host of the ABC’s Q+A program should, logically, have occasioned some comment from the country’s media, given that the program in question is one of the taxpayer funded channel’s flagship offerings.

That it has gone mostly unremarked is due to one reason: Macdonald is perceived as being from the left and publications who tilt towards that side of politics have remained silent as a show of solidarity.

To date, nothing has appeared to analyse why he quit what is a high-profile role in Australia. Some said he had left the program because he had experienced a lot of trolling on social media — he shut down his Twitter account though a lot of interaction for Q+A takes place through this platform — while others studiously avoided speculating on why Macdonald may have decided to return to Channel 10’s The Project.

END_OF_DOCUMENT_TOKEN_TO_BE_REPLACED

There’s a common element to much, if not most, of the news that flits across the TV screens: lies.

People attempt to add a touch of sophistry to lying, by trying to create classes of lies, but in the end it all adds up to the same thing: saying one thing when knowing that the opposite was correct.

One well-known example: the current president of the United States, Joe Biden, came to office promising a US$15 minimum wage for the country. He also promised to provide medical services for all and forgive at least a part of the billions in student debt.

END_OF_DOCUMENT_TOKEN_TO_BE_REPLACED

Finally, someone from the mainstream Australian media has called it: Q+A, once one of the more popular shows on the ABC, is really not worth watching any more.

Of course, being Australian, the manner in which this sentiment was expressed was oblique, more so given that it came from a critic who writes for the Nine newspapers, Craig Mathieson.

Newspapers from this company are generally classed as being from the left — they once were, when they were owned by Fairfax Media, but centrist or right of centre would be more accurate these days — and given that the ABC is also considered to be part of the left, criticism was generally absent.

A second critical review has appeared on April 5, this time in The Australian.

Mathieson did not come right out and call the program atrocious – which is what it is right now. The way the headline on Mathieson’s article put it was that Q+A was once an agenda setter, but was no longer essential viewing. He was right about the former, but to call it essential viewing at any stage of its existence is probably an exaggeration.

END_OF_DOCUMENT_TOKEN_TO_BE_REPLACED

Peter van Onselen is an academic from Western Australia who came to prominence in 2007 when he co-authored a biography of John Howard, the Liberal prime minister who reigned from 1996 to 2007.

Nearly 14 years later, Van Onselen has graduated to become a journalist who writes a weekly column for the right-wing broadsheet, The Australian, and also functions as the political editor for the tabloid free-to-air TV channel, 10.

Recently, however, Van Onselen has shown that he is no journalist, but rather a political operative who looks to back his powerful friends when they need his help. And nobody has needed his help more than the attorney-general, Christian Porter, a close mate of his and a source for many of his stories.

Porter was recently accused of raping a woman in 1988, when she was 16 and he was 17. The woman, known as Kate, died by her own hand last year, and did not make a police complaint, though she did toy with the idea. She is said to have been a highly intelligent person, but the alleged incident appears to have taken its toll, and she was described by many as having some mental problems.

END_OF_DOCUMENT_TOKEN_TO_BE_REPLACED

The ABC is always whinging about the funding cuts it has had to suffer, with the Federal Government having cut the public broadcaster’s annual handout by a sizeable amount.

But the corporation makes its case weaker by splurging out on cosmetic exercises to keep its big names happy, with a case in point being Sarah Ferguson’s Four Corners program on the riot in the US capital on January 6.

Had Ferguson’s effort offered some context about the incident, instead of being a straight news program, it would have made some sense. But what is the point in having an Australian reporter file a 45-minute piece about an incident that occurred nearly a month prior?

Audiences in Australia have been enduring a surfeit of coverage about the riot, with there being no shortage of news clips from US broadcasters being shown on the ABC, the other public broadcaster SBS, and also the three Australian commercial channels.

Add to this the fact that the ABC already has three staff reporters in the US. The corporation’s news channel also has a weekly program devoted to the US called Planet America so there is no dearth of coverage of the country.

Ferguson and her husband, Tony Jones, went to the US on January 15 along with a production crew. The ABC must have spent a decent sum on their upkeep and travel. So how can the corporation justify its grumbling about funding cuts when it seemingly has plenty of cash to indulge Ferguson and let her make vanity broadcasts?

END_OF_DOCUMENT_TOKEN_TO_BE_REPLACED

Last month, the Australian Broadcasting Corporation, a taxpayer-funded entity, made several people redundant, due to a cut in funding by the Federal Government. Among them was Emma Alberici, a presenter who has been lionised a great deal as someone with great talents, but who is actually a mediocre hack who lacks ability.

What marked Alberici out is the fact that she had the glorious title of chief economics correspondent at the ABC, but was never seen on any TV show giving her opinion about anything to do with economics. Over the last two years, China and the US have been engaged in an almighty stoush; Australia, as a country that considers the US as its main ally and has China as its major trading partner, has naturally been of interest too.

But the ABC always put forward people like Peter Ryan, a senior business correspondent, or Ian Verrender, the business editor, when there was a need for someone to appear during a news bulletin and provide a little insight into these matters. Alberici, it seemed, was persona non grata.
END_OF_DOCUMENT_TOKEN_TO_BE_REPLACED

In the first three weeks of June last year, the ABC’s Sarah Ferguson presented a three-part saga on the channel’s Four Corners program, which the ABC claimed was the “story of the century”.

It was a rehashing of all the claims against US President Donald Trump, which the American TV stations had gone over with a fine-toothed comb but which Ferguson seemed convinced still had something hidden for her to uncover.

At the time, a special counsel, former FBI chief Robert Mueller, was conducting an investigation into claims that Trump colluded with Russia to win the presidential election.
END_OF_DOCUMENT_TOKEN_TO_BE_REPLACED