The ABC has been caught out changing an online news report after iTWire pointed out that the report in question — about Thursday’s Q+A program — contained no mention of the fact that Alastair MacGibbon, the chief technology officer of security shop CyberCX, is currently providing advice to Medibank Group, a company which recently suffered a devastating network attack.

[This story was originally published at itwire.com]

MacGibbon was given a platform to tout his wares on the ABC’s Q+A program on Thursday with only a fleeting mention of the fact that his firm is now advising Medibank how to deal with its ransomware attack and subsequent data leak.

But even that kind of mention was absent in the online news report as can be seen from the screenshots included in this article. 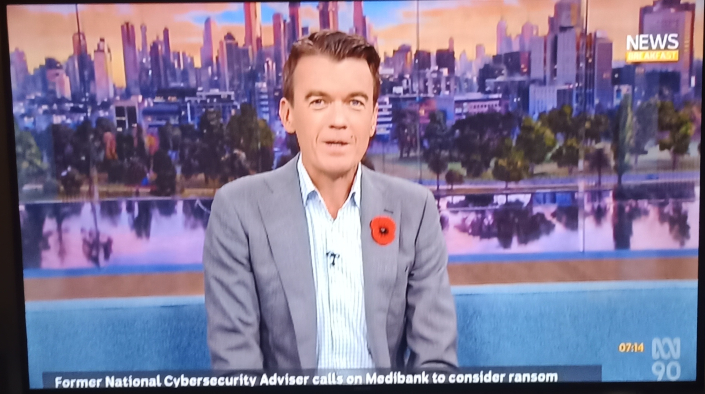 No mention of MacGibbon’s CyberCX and Medibank roles on the ABC News 24 ticket on Friday morning.

On News 24, the ABC’s rolling news network, the rotating headlines again had no mention of MacGibbon’s involvement with CyberCX or Medibank.

On Q+A, MacGibbon pushed the idea that Medibank paying a ransom would not be such a bad option after all. The attackers have asked for US$9.7 million but exactly what they have promised in return is not known.

When the broadcaster was initially asked about the platform afforded to MacGibbon, I was careful to point out that host David Speers had mentioned his [MacGibbon’s] connections to CyberCX and Medibank at the beginning of the show.

Thereafter, for the remainder of the show, the legend accompanying his name on the Q+A screen showed only “former national cyber security adviser”. 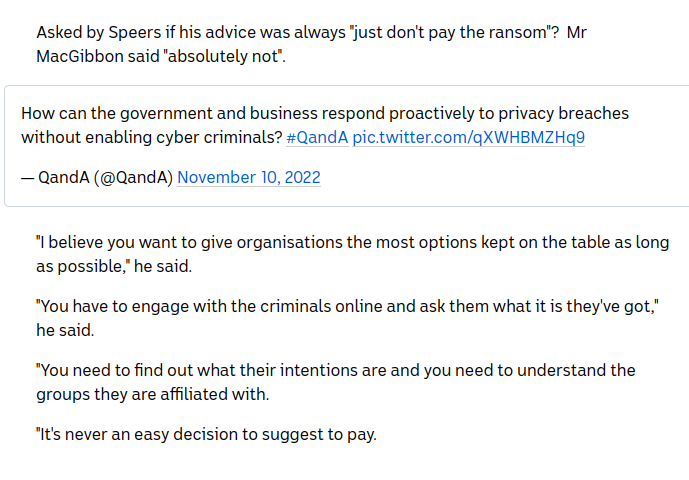 Some of the paragraphs in the original ABC report. The changed version is below.

Asked about the lack of disclosure right through the program, an ABC spokesperson did not mention the news report on the company’s site that gives MacGibbon what is effectively a free kick. Instead, the spokesperson wrote back:

“I disagree with you. Relevant excerpts from the program transcript below.

“On air intro to Alastair MacGibbon:

“David Speers: Cyber security expert Alastair MacGibbon, whose firm CyberCX has been engaged by medibank as a strategic adviser. 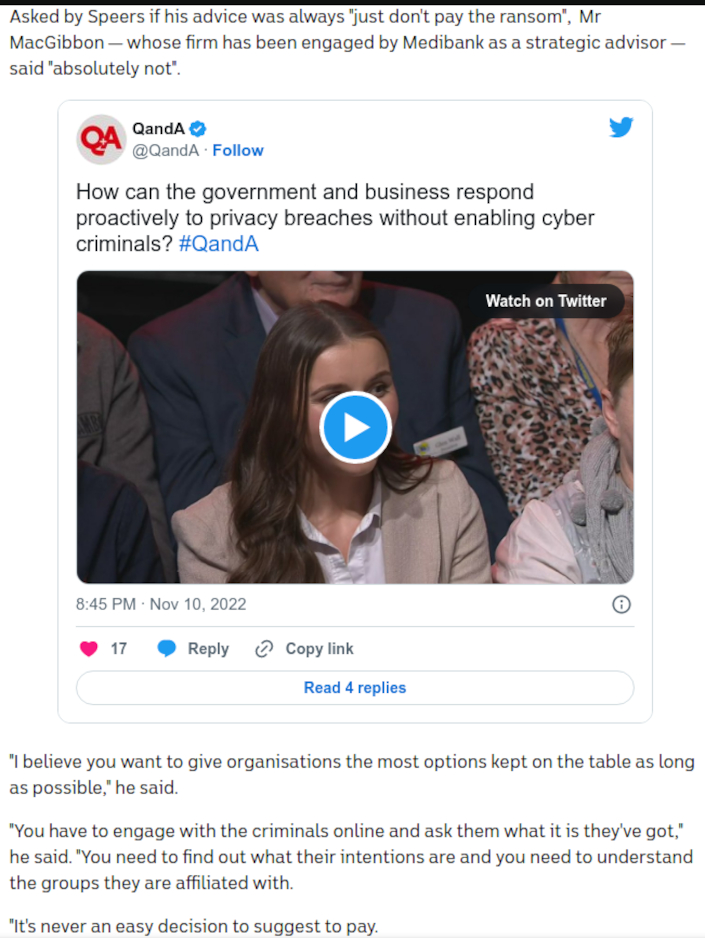 “David Speers: I appreciate you’re a little conflicted you can’t talk too specifically about what’s going at Medibank, you were called in post-event to provide advice to them, but generally coming back to Emina’s question which is about this conundrum of whether to pay the ransom or not… I think you just said it is a legitimate option in some cases so your advice presumably isn’t always just don’t pay the ransom.”

But the spokesperson did not mention that this was all said at the beginning of the show. The question referred to was the very first one. And anyone who started watching the show after this, would have had no idea of MacGibbon’s massive conflict of interest.

The full transcript for Thursday’s Q+A was not available to the public at the time of writing. Of course, I would not be surprised if the ABC doctored it to suit its own version of events.

I then replied to the spokesperson as under:

“Please note that I have pointed out that Speers did make some reference to MacGibbon’s current work status at the start of the program. The snippet you attach was after the first question.

“And so I ask again: why did the legend below MacGibbon’s name not mention his CyberCX and Medibank involvement? 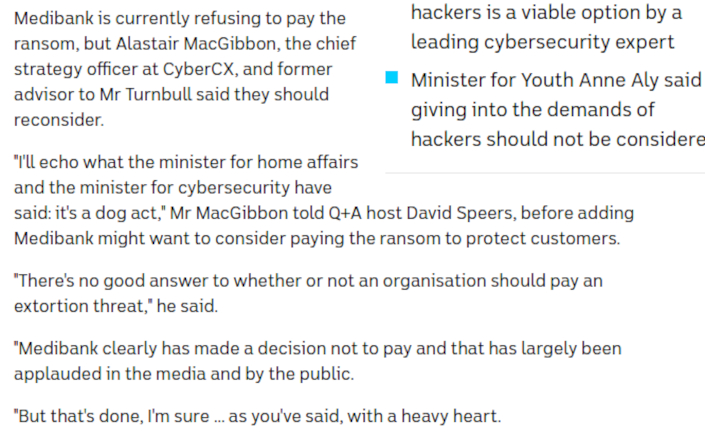 Paragraphs from the original ABC story which were changed as seen in the screenshot below.

“Is everyone expected to start watching Q+A right at the start?

“You have conveniently omitted any comment about the news story that makes no mention of MacGibbon’s conflict of interest. Why are you avoiding this?”

The spokesperson did not respond to this second query. The broadcaster’s communications lead Sally Jackson replied, including in her email parts of the story which had obviously been altered since they were published. She claimed MacGibbon’s role as a Medibank adviser was indeed mentioned within the story.

But she was apparently unaware that I had saved a copy of the story when first viewing it.

Jackson referred to a particular paragraph as saying: “Medibank is currently refusing to pay the ransom, but Alastair MacGibbon, the chief strategy officer at CyberCX, and former advisor to Mr Turnbull said companies should not rule out payment as a blanket response to such demands … Asked by Speers if his advice was always ‘just don’t pay the ransom’, Mr MacGibbon — whose company provides advice to Medibank — said “absolutely not”. 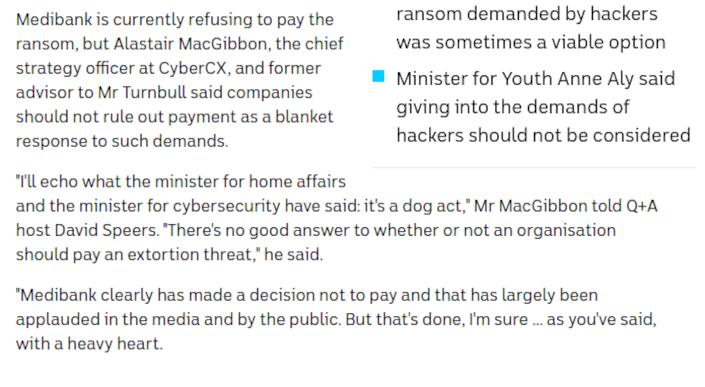 The text at the time when I saw the story was: “Medibank is currently refusing to pay the ransom, but Alastair MacGibbon, the chief strategy officer at CyberCX, and former advisor to Mr Turnbull said they should reconsider.

“Asked by Speers if his advice was always “just don’t pay the ransom”? Mr MacGibbon said “absolutely not”.

“I believe you want to give organisations the most options kept on the table as long as possible,” he said.

“You have to engage with the criminals online and ask them what it is they’ve got,” he said.

“You need to find out what their intentions are and you need to understand the groups they are affiliated with.

“It’s never an easy decision to suggest to pay.”

The ABC claims it is the most trusted news organisation in the country, but this episode shows that it is just like every other company that twists and turns when it is caught with its pants down and does not mind telling the occasional lie.

Incidentally, this is not the first time that MacGibbon has used Q+A to push his barrow. The last time, in October 2021, he took the chance to push the discredited Russiagate controversy that claims Russia interfered in the 2016 US presidential election.

When the subject of disinformation came up, MaGibbon said, in part: “They [meaning Facebook] have strip-mined the Internet without any consequence or understanding of the consequences of their actions. They’ve been dragged since 2016 and the Russian interference in the US presidential election to the concept of being at least partly responsible for the information that is displayed on their many sites to the billions of people that use it. [enphasis mine]

MacGibbon should have been aware that Russiagate has been debunked more times than once. A year-long investigation led by former FBI chief Robert Mueller found zero evidence to support the Trump-Russia conspiracy theory.

CyberCX has been contacted and asked why its involvement with Medibank is not mentioned on its site. The company does not have an email address for media queries, only a Web form, so I have sent a query using the form.